So much of the enjoyment we draw from nearly any hobby is born of friendships formed along the way.  Geeking out over newly-hatched snakes is fun; the fun is redoubled when we text a pic to a beloved friend and receive an elated phone call in return. The best of these friends bolster our spirits when we're faced with life's inevitable valleys, and help hone our vision and drive as they push us to take our projects to even greater heights. To this point, they also help bust us out of our comfort zones and challenge us to level up as keepers and as people.  Even better is when these friendships are rooted in similar interests, but diverge into niche focuses that allow each of us to live vicariously through one another, all the while strategizing, sharing best practices, and cheering each other on along the way.

Nick Bottini of Cold-Blooded Earth (CBE) is one such friend of mine.  I've known Nick for more years than I'd almost care to admit at this point; I've watched him grow up in the hobby, work as a zookeeper where he met his amazing wife Kendra, and finally strike out on his own to work with blood & short-tailed pythons full time.  Over the years he has assembled an immaculate collection of animals with a focus on brongersmai color mutations as well as select breitensteini and curtus.  It's been a pleasure to see his collection level up year after year as he branches out into new color morphs and achieves fantastic combinations with his blood pythons.  His work with Golden Eyes and combos, Electrostatics, T+ albinos, Stripes, and now the Pied blood python project, has allowed me to live vicariously through his adventures with morphs and he never fails to impress from one season to the next. 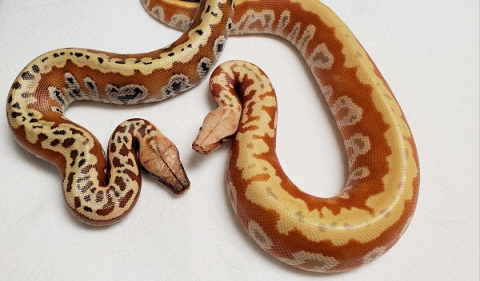 On the flip side, Nick has been wonderfully supportive of my obsession with breeding insanely red blood pythons.  Over the past two decades of keeping and breeding blood and short-tailed pythons my goals have been focused on: make the healthiest, most intensely pigmented, even-tempered animals possible. In doing so, the "normal" animals have been the basis of my program, and I haven't ventured much into color mutations outside of the T+ albinos and PE Stripes that have long been part of TBC's collection. Nick and I have batted ideas around over the years, with thoughts of, "Wouldn't XYZ bloodline look cool as a Golden Eye, or T+ stripe," or myriad other morphs.

Infusing crazy color into various morph projects has always been a back-burner goal, with the primary focus on building consistency of color and type within a line while maintaining genetic diversity. Every season I think I should pick up a key morph or two, but haven't quite been ready to pull that trigger.  Part of the reason for this is that there are several great blood python breeders working with these morphs, and I enjoy seeing their successes without feeling a need to compete with them. I want to be able to cheer them on without encroaching upon their customer base by producing similar animals that aren't my primary interest...I'd rather refer potential customers to Nick & a handful of others than sell them that same color morph myself. There has been a reciprocal approach as well - I receive referrals each year from my "morph brethren" who send customers this direction looking for intensely colored red blood pythons. It's been a beneficial relationship for all involved, and we're able to help new keepers get started on the right foot to best enjoy their animals - a satisfying part of the journey.

Now along this journey of blood python-dom, new mutations have been established and introduced and collectively drooled over by breeders and hobbyists alike.  One such mutation is the Flower morph, first proven and established by Dave and Tracy Barker at Vida Preciosa International (VPI).  Flower blood pythons are intensely colored, with exquisite lace-like, filigree patterns.  They are incredibly beautiful, captivating creatures and still in the early stages of morph combinations; much remains to be discovered about their genetic potential, both in the homozygous Flower morph and its heterozygous form known as the Pollen trait.

Nick has been working with Pollens in recent seasons and is well on his way toward various Pollen and Flower combos.  As such, they've been a frequent topic of conversation in our ongoing snake discussions, and Nick has done his best to gently nudge me in that direction as I've dreamed out loud about breeding them into my Raspberry and redheaded T+ albino lines. This week, Nick did more than nudge - he pushed me to level up with the addition of a handsome, richly colored yearling Pollen, also 66% possible-het for T+ albino. Nick recognized that I was hanging out in my comfort zone and gave me a hearty shove back out as he opened the doors to this project.  This is a dream realized after several years of refining bloodlines for the next chapter, and as such this lovely new snake needed a unique name befitting his stature here.  With a nod to J.R.R. Tolkien, it's my pleasure to introduce "Mellon," the Sindarin word for "friend." 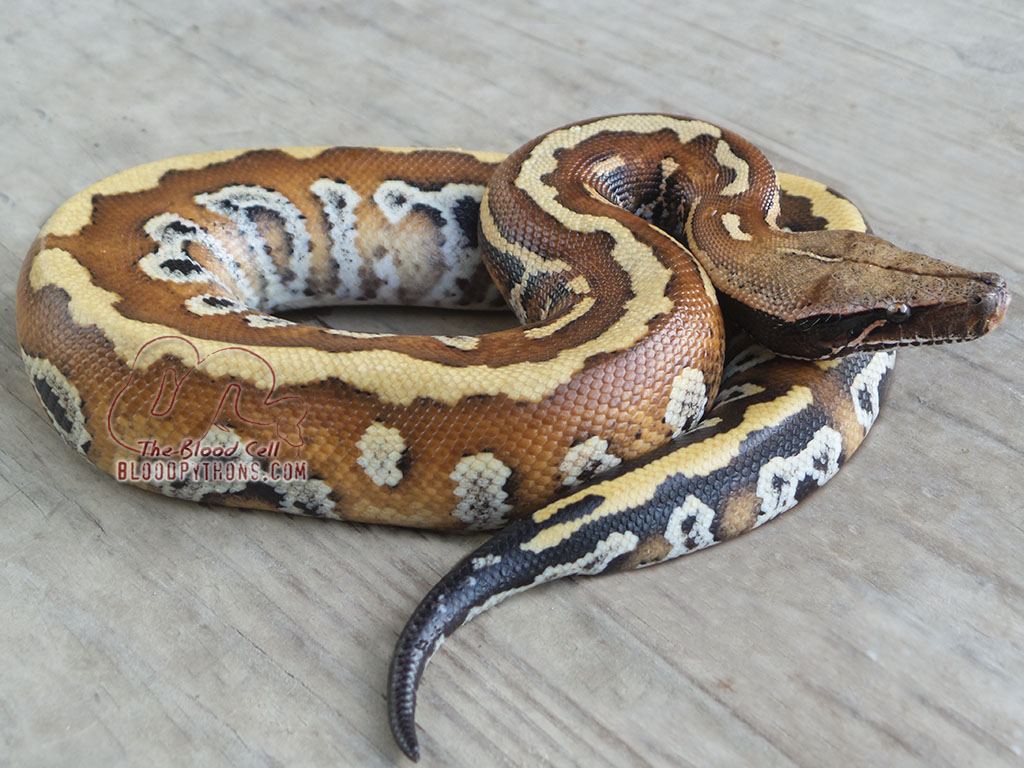 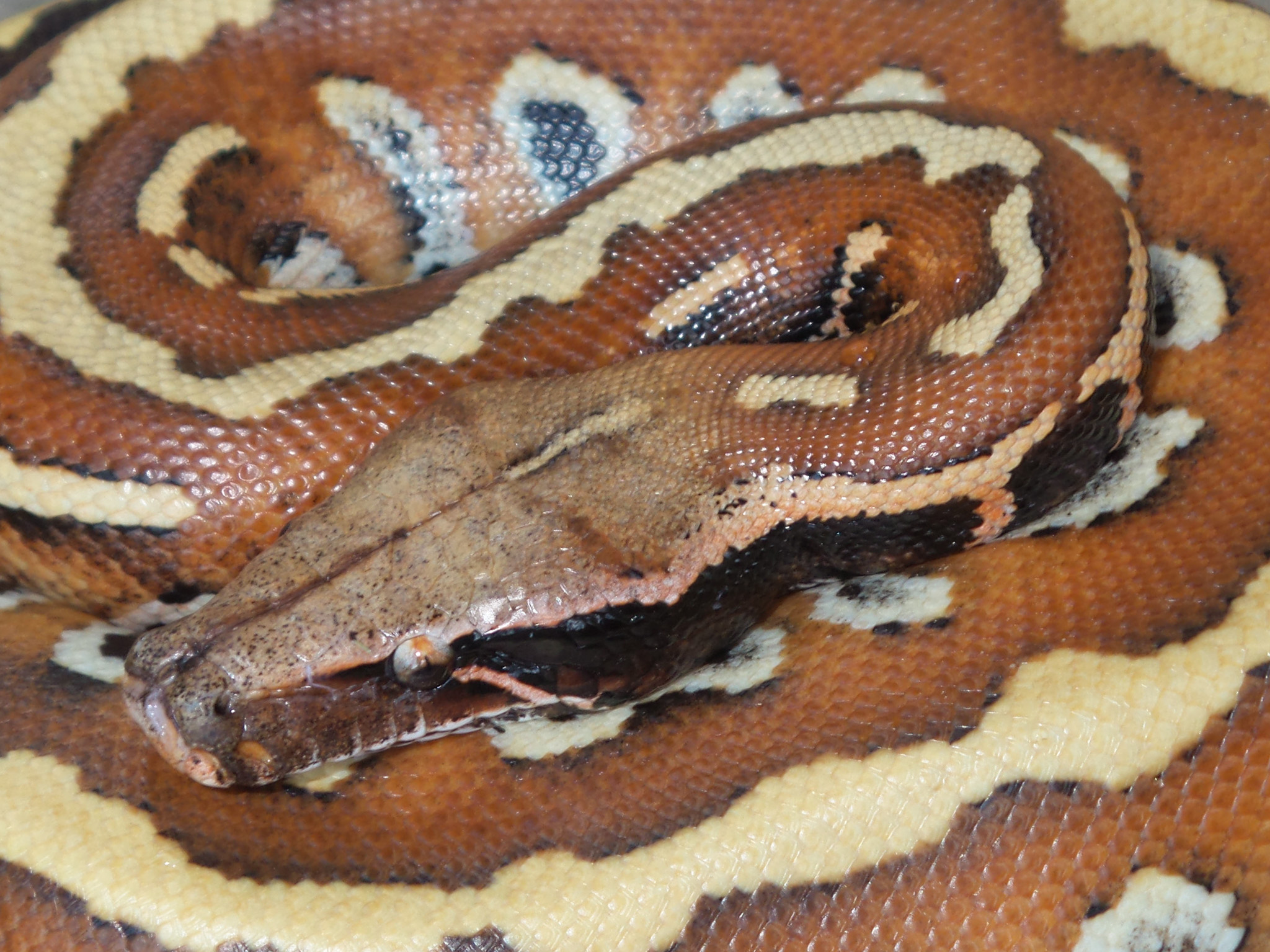 There's so much more to look forward to, and I'm grateful to Nick for giving me the push needed to take this next step!

No comments made yet. Be the first to submit a comment